With the demise of the netbook, there has been a gap at the compact end of the market that spending a £1,000 on an ultrabook doesn’t really solve. I used to love my Asus EEE 901; it had a 9 inch screen, an Atom processor that was good enough for blogging, surfing the web, doing the odd bit of light gaming (Space Rangers 2 and Football Manager mostly), decent battery life and it slipped into my manbag with no problem. Yes, the de facto screen resolution of 1,024×768 was a bit crap but by and large it was £200 well spent. What I would have loved though was the same hardware and a smaller screen in the 701 chassis, because that was truly portable. Of course the marketing departments eventually got involved and feature creep eventually lead to a blurring of the line between netbooks and low end laptops in price and spec, which ultimately lead to their demise. It’s interesting to see though that Asus, the originator of netbooks back in the day when they were called SCCs (small, cheap computers) is relaunching them.

Since my trusty EEE 901 gave up the ghost a couple of years ago, I’ve tried various alternatives as a portable machine for using when I’m out and about. The ASUS Transformerpad TF300T was probably the best of the alternatives. If you don’t know, it’s an Android hybrid tablet with a dockable keyboard. Both the tablet and the keyboard have a large battery in them, giving a potential 15 hours or so of battery use. Unfortunately some units, including mine, had a hardware fault that meant the battery drained overnight in standby if the keyboard dock was attached. This could only be fixed by returning the unit to ASUS for repair. Even so, there were so fairly significant issues that stopped the Transformerpad being an ideal replacement for a netbook, not least of all the operating system. I like Android, I’ve been using it since version 1.6 but it’s only when you’re using it in a desktop environment that you get to see how something so well set up for touch can make regular keyboard and mouse use problematic. For example the majority of websites stubbornly defaulted to the mobile version, text editing uses the cut & paste method for touchscreens, and using Google Docs from the web browser was a faff. The UI issues coupled with a screen that should have been higher res given it’s size, made the whole thing a somewhat frustrating experience.

You can of course get any number of very good keyboard covers for the iPad, some of which cost around £100 on top of the price of an iPad itself. The case for an iPad Mini and keyboard cover is much better to my mind than a full sized iPad because by that point you’ve already passed well into laptop price territory.

So the next potential netbook/laptop replacement has to be a Windows 8.1 tablet. There are many to chose from in the 8 inch category, a lot of which also retail for well under £200. The device I’ve used is the Lenovo Miix 2, which can be found for around £170 if you look hard enough. It runs a quadcore baytrail Atom CPU, has a couple of gigs of ram, 32GB of onboard storage and an 8 inch screen with a resolution of 1,280x 800. The screen resolution isn’t brilliant compared to the full HD and higher that’s now found on a lot of tablets but it’s better than what you’d find on a netbook and the same as found on the larger screened  Transformerpad. 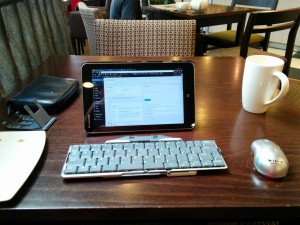 Right from the start the interesting thing about a Windows 8.1 tablet is that you find the exact reverse of all the problems that you had with a keyboard and mouse based Android device. Something as basic as toggling the Bluetooth on and off, is a major faff for example, and the app store isn’t exactly bursting with decent alternatives to IOS or Android favourites. Yes, the live tile start screen makes much more sense on a tablet than it does on a laptop, even a touchscreen laptop but once you step out of the app environment into native Windows programmes, things get tricky. Pinch/zoom works well but hitting menus and buttons on the normal desktop are difficult, even with a capacitive stylus like the Bamboo pen I spent about £6 on.

Where the tablet comes into it’s own is with a bluetooth mouse and keyboard attached. As you can see from the photo, my now ancient yet still trusty Stowaway BT keyboard and mouse magically transform the Miix 2 into a proper portable workstation. I’m logged into this blog on the WordPress backend, writing a piece on 2 step authentication for Google accounts and it’s flawless. Obviously there are inherent limitations in using a set up like this in as much as it’s not truly a laptop replacement as you can’t place the whole thing on your lap. There are some 3rd party keyboard covers available but they’re pretty much a lottery once you leave the comfort of Logitech and other familiar brands.

In a sense it’s an equally unsatisfying solution as the ASUS Transformerpad of course. The Lenovo Miix 2 does the PC part brilliantly but struggles more so with the tablet side of things. Don’t get me wrong, you can, with a lot of searching around, find some great apps for the tablet side of Windows 8.1 but it is a struggle and there are obvious gaps that are just plain irritating- no SONOS, no G+ (so you have to butter fingers your way around a web browser), the default calendar app won’t sync with Google calendars, and so on. On the plus side since you can launch a proper desktop browser, things like Sky Go are a lot easier to run than they are on Android but overall the tablet side is a disappointment. Don’t get me wrong, I now have apps like Twitter, Facebook, Flipboard, Zinio, Tunein Radio, Kindle and Netflix installed, so it’s not all bad by any stretch. I’ve even managed to get a calendar app that syncs with my Google Calendar working. Which is nice. Chrome remote desktop also works like a dream, which means I can remote into my tablet should I wish to.

Steam Home Streaming- my experience
This entry was posted in Technology. Bookmark the permalink.