I’ve now been exclusively using a new and funky Linux distro on my netbook for a couple of weeks. Why? I hear you ask and tha’ts a very good question. I’ve always tended to be a Windows XP sort of person, although I’ve had brushes with Mac OS and Linux in the past. The reason is almost entirely down to my netbook. I have an Asus EEE 901 and from a design point of view it is almost entirely faultless. The build quality is much better than anything I’ve seen, certainly a lot better than the creaky Acer Aspires a lot of my chums have, and the battery life is also pretty good. The main problem though is almost entirely down to the way the SSD (solid state drives) work. I was keen to get a netbook that didn’t have a traditional hard disk drive because they’re not as durable, so the 12 gig EEE 901 seemed ideal. I didn’t spot that it was in fact 2 SSDs, a 4gig primary drive for the operating system and an 8 gig slower SSD for storage.

A couple of years of installing Windows updates, XP SP3 being the biggest, and even with programmes installed on to the 8 gig storage drive, I kept on getting low disk messages, especially when Windows critical updates where being installed. I’ve tried every little trick, including removing dll caches, deleting hotfixes and everything but it had reached the point where my trusty little EEE was choking. 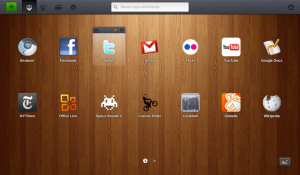 I looked at a number of different Linux distros, from Ubuntu to Opensuse but then I came across a French distro that looked really interesting called Joli OS. From reading the website it looks like it’s based on Unbuntu but specially designed for those of us who use our machines mostly for social media and internet based stuff.

Since the last update, Joli is split into two parts, Joli Cloud is a cloud based desktop that utilises HTML5 and stores a load of web applications (written, unsurprisingly, in HTML5) that you can access through any machine anywhere. Joli OS is a Linux based desktop that synch’s with the cloud part of the package. It has a sort of smartphone style launcher for applications installed via it’s JoliStore and these are a mixture of web based apps like Hootsuite and local installs like GIMP. There’s also a local apps button which takes you to a launcher for programmes you’ve installed locally via more traditional Linux methods. It took me a while to suss out the whole searching a repository for the programme deal but once I’d got there, I’d installed some productivity applications, including a remote desktop programme, fairly easily. It’s also got full integration of Dropbox into it’s file manager, which is great.

Because Joli OS is aimed at older machines and underpowered machines, it runs fast on my EEE. Installing it wasn’t quite as easy as it should have been as I first had to disable quick boot and silent boot, something I missed initially even after altering boot preferences to boot from USB. Still, I got there in the end. The install process lists a few of the more popular netbooks to chose from, mine included so all the drivers were there and installed right from the word go. Apart from the webcam, I still haven’t sussed out how to get that running…

So what are my initial thoughts after a couple of weeks of using this spangly new OS? They are overwhelmingly positive. I love the fact that WINE is integrated seamlessly so I’ve been able to port across a few old friends like Filezilla without any problems. I’m sure I’ll eventually find a nice native FTP programme but with so much else to tinker with, a few familiar faces are not unwelcome. Battery life seems greatly improved and I still have almost a gig of free space on my primary SSD. Which is nice.

There are a few glitches though. The wifi isn’t perfect. I’ve been on the move the last couple of days and when I’ve woken the machine up from sleep once or twice it’s been adamant its still connected to Virgin Trains wifi. Which is hasn’t been. Whilst it’s great that the FN functions like volume and brightness still work, the brightness auto defaults to full when you power down and switch back on, which is irritating. And I’ve already mentioned the webcam. It’s not something I use much to be honest but I’m the sort of person who likes something to work because it should not because I’ll use it.

Still, Joli OS is only on release 1.2 and so far I’ve seen more than enough to stick with it and haven’t been tempted to give any of the other more mainstream distros a try. I’ve read exceedingly negative things about Ubuntu’s Unity desktop on netbooks, so now I’ve found something I like and can get along with I’m going to stick with it 🙂

5 Invaluable iPhone Apps
This entry was posted in Reviews. Bookmark the permalink.