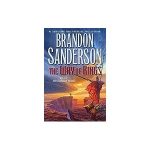 I don’t often pick up books on import but the publication date of The Way of Kings between the US version and good old Blighty in this instance was more than a little ridiculous, so I bit the bullet and got the gaudy 1980’s style cover version.  Nothing says epic fantasy like a histrionic cover. To Americans at least.

This is a huge huge book. Over 1,000 pages in hardback in fact, which doesn’t bode well for the paperback version(s). I’ve not read any of Sanderson’s Mistborn series but I have read his continuation of Robert Jordan’s Wheel of Time and I think he’s doing a better job of it than the great man would have himself.

The world Sanderson has created is very different to the general fantasy worlds that are often quite analogous with our own. There is a preponderance of crustacean based creatures in these books, which definitely makes a change. The magic system is quite unique too, not as confusing at the Malazan Warrens or as formulaic as the Channelling in the Wheel of Time books. To be honest, when one of the Shen does a bit of binding himself to walls and the ceiling whilst attempting to assassinate someone, it comes across as a bit Playstation (Prince of Persia perhaps). Still, it’s top stuff.

I’m about 400 pages in but you always know when you’re reading a good book when you glance at the clock and see it’s 1am. 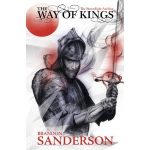 The Way of Kings is out on 30th December, and available for pre-order from Amazon for a more than reasonable £11.76

Towers of Midnight, Book 13 of the Wheel of Time, Robert Jordan and Brandon Sanderson

Towers of Midnight, Book 13 of the Wheel of Time by Robert Jordan and brandon Sanderson
This entry was posted in Books, Other. Bookmark the permalink.