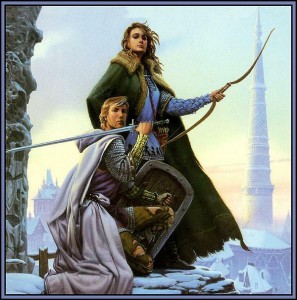 Tad Williams wrote a trilogy of high fantasy many moons ago called Memory, Sorrow & Thorn. It started with the Dragon Bone Chair in 1998, continued with The Stone of Farewell in 1990 and concluded with one of the largest single volume hardbacks ever released, To Green Angel Tower. To Green Angel Tower weighs in at over 520,000 words, 50,000 more than the enormous Naked God by Peter F Hamilton and nearly a 100,000 longer than George RR Martin‘s longest book in the Song of Ice and Fire sequence. I doubt that a publisher would be willing to bind such a long book today.

William’s books outside of this series world of Osten Ard have been mixed in my opinion. The writing in the Otherland series that followed Memory, Sorry & Thorn was solid but was let down by the repetitive nature of the set up. Enjoyable, and definitely before it’s time in the way it dealt with virtual reality, it wasn’t really fantasy but fell short as science fiction too. Shadowlands is a series I’ve not read- the first book was initially an interactive multi-media creation but I have to admit I loved 2003s The War of the Flowers.

I remember being very pleased when I finished To Green Angel Tower way back when, thinking that Tad William’s was actually a pretty young guy and we could expect a steady stream of high quality fantasy from him for decades to come. It turns out I was wrong in this expectation but I’m still holding out a return to the lives of Simon and Miriamele will be a good series.

So here is the press release announcing the publication:

NEW YORK, NY, April 2, 2014—Betsy Wollheim and Sheila Gilbert, Publishers of DAW Books, have acquired The Last King of Osten Ard, a sequel trilogy to Tad Williams’ New York Times bestselling Memory, Sorrow, and Thorn trilogy. The series will begin with The Witchwood Crown, continue with Empire of Grass, and conclude with The Navigator’s Children.

Tad Williams has been one of the most respected names in speculative fiction since the release of his debut novel, Tailchaser’s Song, in 1985. He took the fantasy community by storm in 1988 with the first novel in the Memory, Sorrow, and Thorn trilogy, The Dragonbone Chair (DAW). This first installment and the subsequent books—Stone of Farewell and To Green Angel Tower—sold millions of copies worldwide and have been translated into twenty-five languages. Since the release of this classic trilogy, Williams has authored many critically acclaimed novels, short stories, and comic books, including the Otherland, Shadowmarch, and Bobby Dollar series.

Memory, Sorrow, and Thorn was an inspiration for many of the fantasy genre’s great talents, including George R. R. Martin, author of the phenomenally popular Song of Ice and Fire series, and Christopher Paolini, New York Times bestselling author of the Inheritance Cycle, who called Memory, Sorrow, and Thorn “one of the great fantasy epics of all time.”

In this new trilogy, Williams journeys back to the magical land of Osten Ard and continues the story of beloved characters King Simon and Queen Miriamele, married now for thirty years, and introduces newcomer Prince Morgan, their heir apparent. Also expanded is the story of the twin babies born to Prince Josua and Lady Vorzheva—a birth heralded by prophecy, which has been the subject of feverish fan speculation since the release of To Green Angel Tower in 1993.

In The Last King of Osten Ard, Williams returns with the ingenious worldbuilding, jaw dropping twists and turns, and unparalleled storytelling that have made him one of fantasy’s brightest stars for more thirty years.

Towers of Midnight, Book 13 of the Wheel of Time, Robert Jordan and Brandon Sanderson

Against All Things Ending: The Final Chronicles of Thomas Covenant, Stephen Donaldson

Wheel of Time Book 12: The Gathering Storm, Brandon Sanderson and Robert Jordan
This entry was posted in Books, Other. Bookmark the permalink.