Bit of a change in tone this week. If you were to say “Neil Finn”, most people if they knew would probably say, ooh, he’s one of those brothers from that 80’s band Crowded House. 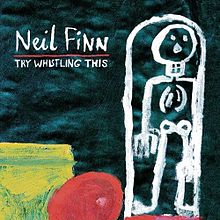 Post Crowded House though he did and still has a fairly successful solo career. Released in 1998, his first solo album Try Whistling This is a great listen. It’s acoustic for the most part and less poppy than Crowded House.

My stand out tracks are the title track (see below) , Last One Standing and She Will Have Her Way.