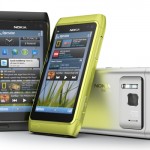 The Nokia N8 is something of a conundrum. I’ve had smart phones before they were called smart phones, before they actually had phones in them and you had to infa-red (via the IrDA port) it to your Nokia to it to check your email and use really crappy WAP stuff. I am of course talking about the PDA (personal digital assistant) which eventually morphed into the smartphone.

In terms of smartphones though, despite a mixture of Android, Apple and Windows Mobile devices, I’ve never actually had a Nokia smartphone to play with. I came close with the E71 but opted for a Blackberry instead.

Opening the Nokia N8, the first thing I was struck by was the comparative lightness of the device compared to my iPhone. Given that it has a metal body, I expected it to be heavier. It certainly doesn’t feel flimsy though, the phone feels very rugged, partly due to the metal casing and partly due to being screwed together (the battery isn’t user replaceable).

The screen dominates the front of the N8 and once it’s powered up, it lives up to it’s promise, an absolutely lovely AMOLED screen. AMOLED screens offer more vibrant colours whilst at the same time eking out the battery longer.

The Symbian operating system whilst being new to me was familiar enough in design to have me setting the thing up without having to refer to the manual too often. This is good since the manual as such is a quick start guide, with a full manual being on the phone. This isn’t much use when you want to check something as you fill some settings in as the user guide replaces the settings page and you’re left to flounder through the menus again afterwards.

This sort of awkwardness is sort of a recurring theme with the Nokia N8. I don’t work in IT but I am fairly IT literate. Only yesterday I was configuring the shares on a NAS box at home via RDP from my desk at work. I’m not like some of the middle aged ladies in our office  who call their computer a screen. So why did it take me about 3 hours to set the N8 up to my satisfaction then?

The user experience isn’t great. These are a few of the issues I had setting up the N8:

Not the most user friendly phone to get going with really, which is a shame because when things are working it’s great. The menu layout is intuitive, the multitasking works properly and is easily accessible via the menu button. The haptic feedback on the capacitive touchscreen is sharp and clear (although I will probably turn it off) and the screen itself is faultless.  Nokia aren’t stingy with either specification or included extras either. The camera is a 12MP Zeiss lensed affair and has an automatic flash. The N8 also has HDMI out AND comes with the mini hdmi to hdmi adapter too, which is more than the FLIP HD does and that’s a dedicated pocket camcorder. 16gig of onboard storage is good and this can be supplemented by a micro SD card too, meaning you should never run out of storage.

The ovi website is clever too in as much as it lets you sync your phone with the calendar and contacts you can set up on it. This certainly saves a lot of aggravation in typing out details on a touch screen but syncing it to something like my gmail contacts would be handier. I might be able to do this, I have no idea, the documentation isn’t up to it.

There is definitely a good phone in there struggling to get out from a firmware that if forums are anything to go by, still has a fair share of the issues that were evident in the beta pre-release version of the device. If Nokia can take on board the near endless comments on forums and get an update out soon that resolves all of these issues, the N8 is a phone I can recommend. At the moment though I’d have difficulty recommending it over something like a HTC Desire or an iPhone, even if they do have inferior specs in quite a few areas.

Reset to Factory Defaults won’t work on my Kindle

Why I’m falling out of love with Android
This entry was posted in Reviews. Bookmark the permalink.