At the St Albans book group I attend, someone mentioned doing a personal top ten last week. Excellent idea, so here it is!

A top ten list of books isn’t ever going to be definitive. For starters, it says a lot about me as a person and where I was at the time I read them. I tend to re-read most of the top ten every 5 years or so, and I’m sorry but I can’t be objective about my selection. I was a precocious reader as a youth, I went from primary to secondary school and effectively started reading adult fiction at that point, some of it quite hard going. I don’t think I’ve ever really progressed from that point either, which is a shame.

So in no particular order, here we go with the first five.

I’ve read a lot of Stephen King’s horror fiction over the years. Most of what he wrote in the 1970’s is head and shoulders above anything he’s written in recent years, particularly after his serious lorry accident that got him a lot of hospital time and broken bones. I’m a fan of the Shining, IT and Firestarter for example. But my favourite novel of Kings was only his fourth, and that is the Stand.

What King does so very well is write with an accessible style about characters that are in the most believably real. Even if most of his supernatural stories end up with some sort of deus ex machina ending (or a supernatural firework display as the 12 year old me once complained), the path that takes you there is always an interesting one.

The Stand could easily be a standard post apocalyptic tale, in this instance a mutated form of flu is released from a germ warfare lab, but it goes on from that, containing Kings trademark supernatural elements as two sides build, one around Mother Abigail and the other around Randall Flag. Both these two characters have supernatural elements to them but it doesn’t distract from the grounded interaction between the rest of the characters. At the time, the Stand was the longest book I read, and in it’s uncut version, is still probably one of the longest single volume pieces I’ve read. But it’s not hard work, it’s an easy read thanks to Kings style of writing and doesn’t outstay its welcome. 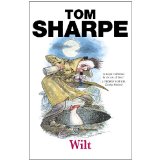 From one genre to another and in this instance it’s on to humour. Wilt was written in the 1970’s (and turned into a rather crap film with Gryff Rhys Jones in the 80’s) and follows the life and adventures of the titular character as he works at the local ‘tech and tries to keep his wifes misguided ambitions under control. Sharpe has written some jolly entertaining books over the years, although his output has diminished in both quantity and quality in recent times, there are many many things in this book to find hilarious. It is very much of it’s time and in certain areas is both politically incorrect and rather rude but I guarantee you’ll not reading anything as remotely funny for a very long time.

Wilt dreams of offing his overbearing wife Eva but would never actually follow through and commit the crime. Unfortunately, circumstance leads him to burying an inflatable sex doll in the foundations of new build and when someone pouring concrete into the hole spots the doll, a sequence of events starts that Wilt is powerless to halt. Reading the Inspector Flint interrogations of Wilt count amongst the most entertainment I’ve had with my clothes on. This book was written by an absolute comic genius.

The Colour of Magic- Terry Pratchett

I once read a quote that said something along the lines of “The world is divided into two camps, those that say they’ve never heard of Terry Pratchett and those that say, Yes of course I’ve heard of him, I’ve read all of his books!”

This was about 15 or so books ago, maybe more but I still think it stands more or less true. Discworld is a phenomonem, so much so that when JK Rowling proclaimed she thought it was nice that Harry Potter had reinvigorated fantasy but she didn’t consider it fantasy, Pratchett was one of the few successful authors able to pull her up with some authority.

The earlier Discworld novels (to my mind) are much funnier than the later ones. I’m not just saying this as I read them first time around to be one of those irritating people who says, “I was there from day one, I’m a true fan” or anything, I think before the enormous cast of characters came about there was something funnier about it all.

The Colour of Magics main protagonist, Rincewind the Wizard, is one of natures great cowards and his inherent ability to flee in the amusing fashion is one of the great features of this novel. Although the fantasy world is pretty well realised, Pratchett’s strength in this and all the early novels is his great ability to write humour and bomb us all with gags. When the denzins of the city of Ankh-Morpork are introduced to the concept of insurance, it takes literally minutes for the first arson based insurance job to happen- just one example of the lovely skewed logic of it all.

If you’ve read the book, the recent HBO series isn’t very good, the budget needs to be about ten times higher to do the book justice but if you haven’t read the book and you’ve seen the series, you’ll have enjoyed it. That says a lot about the book to me.

A lot of people who don’t read fantasy have some fairly cliched views of the genre, wizards, elves and magical swords feature fairly prominently in their prejudices. In fact the prologue to A Game of Thrones does see some wights attacking people and the main castle at Kings Landing has the bones of some dragons in it but (in this first volume at least) the book is firmly rooted in terra-firma.

Pleasantly the story follows a series of noble houses as they vie for power in a kingdom that has only really been united for a relatively short period of time. There are no village boys who have to follow their destiny on a quest here, there is political machination, violence (and some incest bizarrely), assassination and betrayal, all written with a brutal realism and an attention to detail that make the world utterly believable.

It would be interesting to see what Martin could do in a straight historical setting but to a degree that’s more or less what you get here. The book isn’t short, weighing in at 864 pages, which is about the length of Lord of the Rings in total but if you’ve never dipped your toe into the realm of fantasy, this is an excellent if daunting starting point.

The Blade Itself- Joe Abercrombie

This is another fantasy novel but about as far as you can get from traditional fantasy. Abercrombie is a relatively young author, well he’s under 40 anway, and has only got 5 books to his name. The Blade Itself is the first in a relatively short trilogy and does away with a lot of the conventions of fantasty. You can tell that from the first couple of pages where our barbarian hero, Logan Ninefingers, is running away through the woods shouting “fuck” loudly.

Abercrombie only sketches location with a broad brush, it’s enough to get an idea of where the characters are but descriptive his works are not. His strengths are in the dialogue which is often laugh out loud funny. In a later book one of his characters monologues, “We talked of many things, Duke Orisno and I. He said he’d have my head, I said I quite understood, I found it immensely useful myself.” There is an underlying vein of very dark humour, which at times isn’t underlying so much as sitting on the surface and blowing a raspberry at you.

Abercrombie delights in taking fantasy convention and turning it on it’s head- there’s an unlikely wizard, a baseborn lad who becomes king and a spectularly terrible quest, as well as the sort of behaviour that would make Pratchett’s Rincewind take notes on how to run away more effectively.

If you’ve tried fantasy in the past and didn’t like it, try this. It’s so very different.

Game of Thrones
This entry was posted in Books, Other. Bookmark the permalink.