The age that kids are demanding a TV in their own room is probably getting lower. I remember myself getting a small portable black and white set with a dial somewhat similar to this in my final year of primary school: 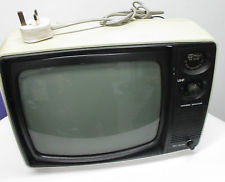 And like the punch line in a bad joke, I did used to watch the snooker on BBC2 on it!

We’ve ummed and arrr’ed about putting televisions in our kids rooms because television is a lot more intrusive than it used to be. There are kids channels that run 24/7, a lot of the stuff you can get on TV that’s very much more unsuitable than what there was when I was growing up in the 80’s.

We are lucky enough to have a separate playroom (we had our adjoining garage converted a few years back), that has a wall mounted telly hooked up to a second Virgin Media box and a couple of games consoles. However we also have three children, two boys, and a girl, who all have pretty different tastes in TV and there are often arguments and fights over who watches what. Last year when our eldest, Sam, turned 9 we decided to put a TV in his room.

Typically, the only “spare” TV we had in the house was unsuitable- it was a 24 inch LG but it didn’t have VESA mountings, and I was adamant I wanted to wall mount the telly to make sure it i) didn’t take up too much space and ii) wouldn’t be knocked on to the floor and broken within ten minutes.

I looked around for something suitable but was unable to find anything at a price I was willing to pay. In the end I co-opted my my PC monitor, the now defunct Asus VE228HR 21.5″ with built in speakers. I hooked up an Amazon TV stick with iPlayer, Netflix and (obviously) Amazon Prime Video, and sideloaded Kodi for the DVD rips we have on a NAS box. The wall bracket I purchased was under a tenner from Amazon, and all I needed to add were a couple of extra long power cables (one for the monitor, one for the Fire TV stick) and we were done.

Our eldest has an IKEA high up bed, and the TV is mounted on the wall at the foot of it. It’s quite an elegant solution- I’ve used Clas Olsen sticky fixers and cable tidies to keep the cables out of the way. I decided on the sticky fixers rather than the cable clips you hammer in as they seemed a little heavy handed.

A few weeks ago I did something similar for my daughter. She’s only 7 but due to various reasons, needs a bit of private space from the boys. I had intended to leave a TV in her room until she was 8 as well but our eldest has control issues and won’t let anybody watch anything without his approval. This used to be if they were in the same room as him but has now extended everywhere at any time. 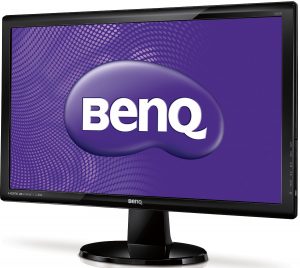 Built in speakers, relatively slim and has VESA mounts!

Because the Asus VE228HR 21.5″ is a few years old now, it isn’t available new, so I had a look around for something similar and ended up with the BenQ GL2250HM 21.5 inch monitor, which at £90, plus a FireTV stick from Amazon Prime Day (£15), was pretty much perfect. I paired this with a BPS tilt & swivel wall mount for under a tenner and I was ready to go. 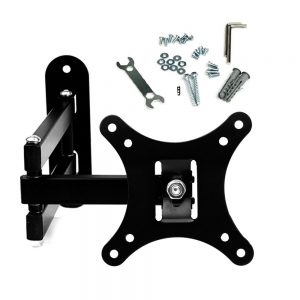 Comes with all the tools to install, just provide a spirit level and a drill!

With a “TV” this small (relatively speaking- I’ve wall mounted our 65 inch Sony using M8 coach screws!), it only needs three screws to hold it up on the swivel bracket. In my daughters room,  there isn’t anywhere to mount it flush to the wall, so she has it on an arm at the foot of her bed.

TV time is limited and the kids generally observe the limits we put on them. The added bonus of streaming solutions is we can simply confiscate the FireTV remotes and they can’t use them. By using streaming solutions, we also have the additional level of parental control that the apps on the FireTV allow.

There are some trade offs of course, the sound is probably a little bit tinnier than I’d have ideally liked (although no worse than the 24 inch LG TV I was originally going to use I must say) and if the internet goes down, that’s pretty much it, aside from local content, but since none of the rooms have a feed from either the satellite dish or the TV aerial, it is certainly the simplest and most cost effect way to do it in my opinion!

The phone I want doesn’t exist and it’s irritating
This entry was posted in Technology. Bookmark the permalink.