Into the Dragon- Bomb the Base 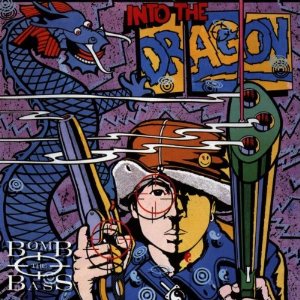 “There have been mixes and dance tracks put together in the past but none have the power to outrun or equal the Megablast!”

I was 13 years old when I heard those immortal words uttered for the first time and coming back to the album they originated from after what must be a good 15 years, what strikes me is how well it’s aged. Tim Westwood still sounds as hilariously naff as he always did on his brief cameo on the start to one of the tracks. Lads of a certain age will always think of the Bitmap Brothers graphically lush (but a bit crap gameplay wise) 16 bit shooter Xenon 2: Megablast when they the song of that name. Or the Assault on Precinct 13 mix at any rate.

Dance music from the 80’s can be extremely rubbish, you only have to watch reruns of Top of the Pops to see that you can’t touch this and probably shouldn’t anyway. Tim Simenon, the chap behind Bomb the Bass, crafted a cracking album. Aside from Megablast you’ll probably recognise Beat Dis, Don’t Make Me Wait and a great cover of I Say a Little Prayer. The album is deleted and obscure enough that I doubt you’ll be able to acquire it through dubious means. Fortunately, the whole damn thing is on spotify though! Give it a listen and pretend it’s a more credible 1998 again.

Sunday Night Music: Try Whistling This
This entry was posted in Music. Bookmark the permalink.