The “Influencer” issue and Mafia III

Adweek ran a long article on the rise of Influencer marketing last year, as though it was a brand new concept and gave exciting/new opportunities for brands to reach out to consumers who are tired of seeing paid ads- apparently the average American is exposed to 5,000 ads a day, so you can imagine how much attention they pay to each of those- and whilst I suppose this is confirmation that this alternative approach to advertising is moving in to the mainstream, I’d argue the frontier of influencer marketing began almost ten years ago when brands started throwing free stuff at bloggers to see what sort of coverage it would give them.

I see an influencer as distinct from a blogger though, although a blogger can definitely be an influencer. Influencers, as the name suggests, are individuals who are deemed to have the reach to take a message to a large audience. Increasingly this means social media, rather than organic search results for a subject that could drive traffic to a blog. It can be chicken and egg, because if you have a super Twitter following that you engage with, you’re likely to be able to drive traffic to your blog but even then, the conversation about your views tends to stay on the social media platform rather than the comments section of the blog.

To a degree I think blogs are getting left behind as the whole social media environment matures. I’ve read comments that bloggers have had more engagement and views from articles they’ve posted directly on to their blogs Facebook page than they have for similar content published on their blog, there are plenty of campaigns that agencies target at Instagram or YouTube users rather than bloggers. Blogs haven’t moved with the times and for certain purposes, particularly marketing, are in danger of becoming irrelevant.

As more and more of people’s internet life is conducted or smartphones and tablets via apps, the actual idea of opening a web browser and loading up an often poorly optimised webpage, is gradually becoming more and more unpalatable.

Bloggers, even with a limited reach, have been getting free stuff for review for years. The reviews are usually favourable (see my own thoughts on that here) but I’ve noticed a trend in the last 18 months that has gradually seen the more canny bloggers subtly re-imagine themselves so their blog is only part of their offering, and often not the part that they make the noise about. Bloggers have started to leave the blog behind, the blog is supported by a large twitter following, a large Instagram following and a YouTube channel.

Note it’s usually not a large YouTube following, I know some great YouTubers, and they have hundreds of thousands, if not millions of subscribers. They’re in a different league to bloggers and bloggers are getting left behind. That in itself is behind some of the drift away from blogging as a central offering within the circles I follow and even move in. Anecdotally I can see if from my own YouTube channel metrics, 90% of my video views come from YouTube and not the blog post they may be embedded into. As bandwidth (generally) increases, that’s a barrier removed and multi media offerings are often much easier to view on a tablet or a smart device.

Of course many, myself included, would rather read something than watch a video but we have to accept that this is not the way the general trend is going. Bloggers get left behind here too- simply reading out a script that is effectively a blog post to camera doesn’t make for a great YouTube post and although some of the skills are obviously transferable, a great blogger doesn’t automatically make a great YouTuber. So bloggers are probably entering the beginning of a long decline in to irrelevance that most won’t notice happening until it’s too late.

So, 570 words in and I mentioned Mafia III in the title, so I’m now going to talk about Mafia III. Mafia III is a video game. When video games are released, generally, the review sites get sent codes in advance so they can have reviews ready for release. I say generally because as games get more multi-player orientated, that aspect is hard to review until the games out in the wild, and a lot of games are also now effectively released unfinished, with a large “day 1” patch to download to make the thing actually work properly.

In some instances reviewers are told what day 1 patches fix and write their review based on that, in other instances they don’t. I won’t pretend to be an expect as the world of games journalism has changed massively since I properly showed an interest in games.

In the past a journo could expect a pretty decent haul in some instances when they got a game to review- some promo stuff like t-shirts, baseball caps or collectables, a boxed copy of the game, or in some instances a nice trip somewhere with an activity thrown in, all picked up by the publisher. This was never restricted to games journalists though, I’ve been on some press days for cars, mobile phones and movies that are very similar. It’s a perk of the job, and often the freebies are divvied up or raffled in the office. That dynamic has changed massively now though. 2K didn’t give review code out in advance of the release of Mafia III, and I’ve seen plenty of tweets from game journos moaning they’re going to be spending the weekend working as a result (reviewing a video game, contrary to belief, isn’t much fun. You need to play it through to completion in a compacted period of time and write about it in detail. It’s not the same as playing something for fun). 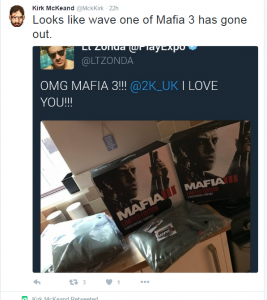 2K basically sent the influencers it had selected a deluxe copy of the game, the soundtrack on vinyl and a record player to play the soundtrack on, as well as some other stuff. It will create a buzz about the game sure, but the aspect, as Adweek put it, of “marketing-induced consumer-to-consumer word of mouth generates more than twice the sales of paid advertising” has got to be brought in to question if all you have is a group of influencers shouting about the free stuff they got. Especially when you have an equal or higher number of game journalists saying they’re still waiting for a download code to simply review the game.

Of course part of this is idiosyncratic to the gaming industry, video game reviews aren’t consumed in the same way that the review of a book, TV show or a movie review might be. Game reviews are often taken as a validation of a purchase already made, or with the younger end of the market, a validation of a lifestyle choice or cultural sub-group that an individual may belong to. If you pick a review of a game that is below expectations (so for example a 7/10 for Forza Horizon 3 or a 7/10 for Gears of War 4), the comments section is full of angry young boys who have never played the game arguing the toss with the reviewer who has played the game- as if the individuals validation as a person has been called into question because a game they are looking forward isn’t as good as they hoped it would be.

In this context perhaps 2K’s approach of seeding influencers with what is effectively payola, isn’t as misplaced as it seems; Mafia III is a highly anticipated game that will sell unless all the reviews are awful, so anything influencers can do to spread the hype will have as much effect as actual reviews.

That is depressing on a number of levels. Is brand awareness now more important than the quality of the product? Is bragging about the freebies you’ve got a good way to promote a product?

Essena O’Neill, AVON and the commercialisation of social media

Under pressure: competitiveness in blogging
This entry was posted in Blog. Bookmark the permalink.