There are now a glut of tablets that run Windows 8.1 that are getting more and more affordable. Toshiba, Lenovo and Asus are in on the act, packing quad core Baytrail Atom procecssors in with 2-4GB of ram and 32+GB SSDs. These tablets, ranging from 8 to 10 inches, are pretty versatile, albeit the Metro interface needs some serious tweaking to make it function well on a tablet.

If you’ve come, like me, from either an Android or IOS ecosystem on a tablet (I’ve used iPads, Transformer Pads, Nexus 7s, and a Nook HD+), there are some baffling omissions right out of the box, and the biggest of these is the lack of a bluetooth on/off toggle button or live tile. I always toggle my BT off when I’m not using a connected device to preserve battery life, it makes sense, so having to:

is about 5 steps too many in my book. There is however a relative easy way to implement this missing functionality.

You can create a desktop shortcut that points directly to the Bluetooth settings section of the Metro settings. Firstly hold down a finger on the desktop until the menu pops up, then select New-> Shortcut. Then paste the following in the destination box: 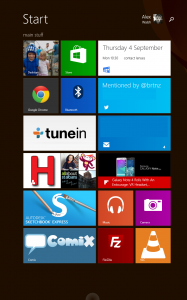 BT live tile, for all to see

The part in bold should tie in directly with which language you selected when you set up your Windows 8.1 device. You can check the language by swiping charms->settings->keyboard, since most commonly you would have chosen a keyboard layout in line with the language settings on the device. Most likely it will be either UK or US, and if the shortcut you make with one doesn’t work, try the other.

Once you have made the shortcut, you can simply pin it to Start, and it will appear as a live tile that you can tap to take you to the settings page and turn BT on/off. Okay, it’s still a two step process but that’s a heck of a lot quicker.

You can see from the photo to the left there is a BT live tile on the Lenovo Miix 2 8 I currently have. There are some other steps that I felt necessary to take to make the device properly “tablet like” but those are detailed in another post here.

The WiFi wont work on my Kindle

Putting a Google+ profile button on your blog

Reset to Factory Defaults won’t work on my Kindle
This entry was posted in Technology. Bookmark the permalink.