In an attempt to get Steam Home Streaming running without too much lag, I recent’y purchased a very long 16mm masonry drillbit and set about replacing parts of our home network that were covered by poweline adaptors with Cat6 cable. I did a before and after test with LAN Speed Test (Lite) to see what difference my drilling, tacking and swearing made and was pleased to see a tenfold increase in network speed. I’ve been using a selection of AV500 poweline adaptors which obviously don’t get anywhere near 500Mbps. Occasionally they’ve hit 80 but it’s more like 30-50Mbps most of the time. Some of the wiring in our house isn’t great and the room I primarily used the adaptors to access was right next to our utility room with the washing machine and tumble dryer in- both of which interfered with the signal. 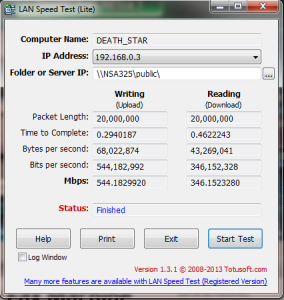 554Mbps isn’t an incredible speed for gigabit networking but I think it’s limited by the speed of the NAS box at the other end I was testing it to.

What I did realise however was one of my switches was only 100Mbps, which wasn’t much use at all, so I spent £12 on  buying an 8port Gigabit switch from Trendnet. It was the installation of this that lead me to cocking up my network massively.

“The internet is down” said the lady wife at about 9pm. And she was right in so far as the network (cabled and wireless) wasn’t working so nothing could connect to the internet. After a few failed attempts at rebooting the VM Superhub 2, and plugging an ethernet cable straight into it, I decided that the Gigabit switch was probably the issue. I had no idea how it was the issue but it was the only thing I’d changed so it had to be that.

It turns out if you really want to banjo your VM Superhub 2, you should connect a switch to it via ethernet AND powerline adaptor because that was the root cause of my problem. Somehow having it connected by these two methods took the wifi and the cabled network down utterly. Unplugging one cable made everything work again. Lesson learnt, shan’t be doing anything that daft again!

Hi Fi snobs- the next generation
This entry was posted in Blog, Technology. Bookmark the permalink.