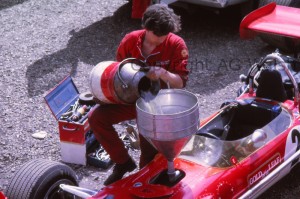 My Dad has always fancied himself. Sorry, that fullstop shouldn’t have been there, my Dad has always fancied himself as a bit of a photographer, and the above picture he took at the British GP in 1969 proves he was more right than not. Graham Hill had nipped out of his Lotus 49, probably for a crafty fag, and my Dad decided to snap it being refuelled, probably whilst having a crafty fag himself. You’ll note the detailed safety precautions the man with the large cannister of petrol and big metal funnel is taking (hint: he’s not having a crafty fag).

If you squint really hard, you can even make out the Shell logo on the blokes jump suit.

In my capacity as a daddy blogger and as a part of the parent blogging community I’ve been invited by Royal Dutch Shell to be part of what they call their Shell V Power Network of Champions. We’ve just had a fairly intensive couple of days being inducted and learning about the technology behind their fuels. Believe me, combustion is only a part of it.

So far I’ve also learnt a few other things too:

I’m still digesting the technology part of it but will no doubt blog about that more when I’ve had a think, either here or probably over at my parenting blog.

A few quid of car

Up a Ladder
This entry was posted in Other. Bookmark the permalink.