There may be times in your life when you have nothing to do or are at a loose end. I had a lot of time like this shortly after I graduated and found myself living in my university town over the summer holidays when there were no buggers about and nothing to do. This was the post web but pre Facebook world too, so there wasn’t quite as much to do online as there is now. 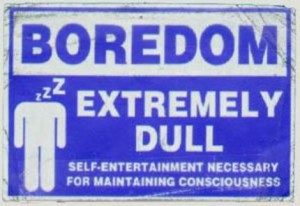 With this in mind, I was inordinately bored at times and therefore faced the challenge of coping with that boredom without going completely insane. I have no idea whether I succeeded or not but here are the results of my efforts.
The key to avoiding boredom is to work on your imagination. You know, that thing you had when you were a kid that meant you found science really tricky as you were staring at Miss Cole and wondering what she looked like topless.

With a well honed imagination you can while away the hours doing things like:

Of course there will be times when you’re simply stuck somewhere and have nothing to do and nothing with you. I suggest in these situations you practice entering a trance. This is a trick I picked up whilst attending lunch time (non interactive) meetings. Get comfy, relax your shoulders and face muscles, unfocus your gaze and concentrate on your breathing. Put all thoughts from your mind, breath in through your mouth and out through your nose. Sooner or later you’ll be in a light trance.

Dealing with semi regular payments in a cashbook analysis
This entry was posted in Other. Bookmark the permalink.