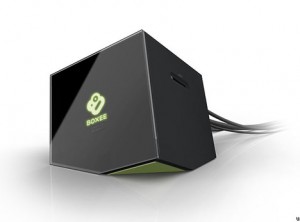 The Boxee Box is a rather natty piece of hardware, built by D-Link and running the Boxee open source media software. In techie parlance it’s a media streamer, but it does a fair bit more than that.

But let’s take a step back for a moment. What is a media streamer I hear you ask. Well I didn’t exactly hear you ask it but on the off chance you don’t know what a media streamer is, I’ll tell you. If you’re not au fait with the term, chances are you’ve still come across a media streamer anyway- BBC iPlayer, 4od and ITVreplay are all media streamers of a sort. They let you watch media, in this instance television programmes, by streaming them from the internet. Under the hood things are a little bit more complicated than that but as a basic description of how they work, that suffices.

Home media streamers often allow you to access features like the iPlayer over the internet but predominately allow you to stream media over your home network. So if you have home movies, DVD rips, music or photos on your home computer but struggle to work out how to show these on your swanky HDTV, these devices allow you to do that.

The idea is nothing new, the most famous software that lets you do this is called XBMC. This stands for Xbox Media Center, and it originally ran on a modified version of Microsofts Xbox. Not that you’d know it because with the remote control and XBMC interface, the modified Xbox was a great media player, at home with DVD’s, streamed media from your home network or even film trailers streamed from the Apple Quicktime Movie Trailers website.

Still, times have changed and the Xbox hardware that many people ran XBMC on is seriously out of date and doesn’t even have a HD capable output.

A lot of people choose to plug their laptop into their telly in order to play digital content on their telly but this is a bit faffy and not much of a permenant option. A lot of more technical minded people even build a HTPC (Home Theatre PC) but to be honest these lack the easy plug and play nature of consumer electronics and I’ve not really dabbled- what’s the point if I know how to use it but it’s too difficult for my wife or friends to use?

So lets get back to the Boxee Box then. The first thing that grabs you when you open the box is how dang small the thing is. Seeing it in photos doesn’t prepare you for its diminutive size. Of course given that it doesn’t have an internal hard drive, there’s no reason why it should be any bigger than it is but even so, it’s impressively small. As you can see from the photos its sort of a corner up off black cube with a funky green logo that appears on the side when switched on. 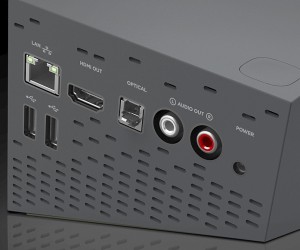 The connectors round the back are fairly basic; a HDMI, some USB ports, a pair of red and white phono connectors for some speakers,and an optical out for high def sound. There’s a LAN port too, but no e-SATA, which is a shame.

Since the January firmware update, things are a lot more stable but still rather American-focused. There are plenty of apps and services you see and think, “Oooh, I’ll have some of that!”, only to install it and then find out it wont work in the UK.

Still, other things work brilliantly. It’s able to stream high definition video over my homeplug network without a problem, and the same goes for DVD ISO’s. It will pick up media from network storage or a shared folder on a PC but it will also take a USB hard drive too.

What it does over with folders and what not is scan them for media, index them, and add details like a brief description and a film poster. This is ace and really user friendly. It does chuck up the odd error but it’s fairly easy to manually amend individual files. It’s more of an issue with TV series because for it to recognise them properly they need to be named in a very specific way. 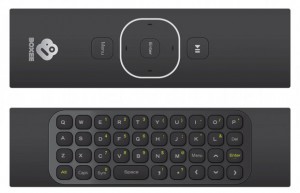 A special mention has to go to the remote too. the front is uncluttered by too many buttons but flip it over and there’s a full qwerty keyboard on the back. This is useful for a bit of web browsing and such but I wouldn’t recommend using the Boxee Box for excessive amounts of web browsing.

Another thing that is useful is the profiling. I have two profiles set up, one for me with all the violent films and stuff that blokes love and one for the kids with cuddly kid friendly films. That way the kids don’t have to see posters for stuff like the Amityville Horror whilst looking for Bolt.

The hardware is great, it’s really quiet and unobtrusive. The firmware is still a bit of a work in progress but what it does well at the moment it does very well and things can only get better. At around £190 it’s not the cheapest streamer around but it is so much more user friendly than the competition. The database of media is much easier to navigate than a folder list, it makes it easier for non techies to use.

Steam Home Streaming- my experience
This entry was posted in Reviews. Bookmark the permalink.