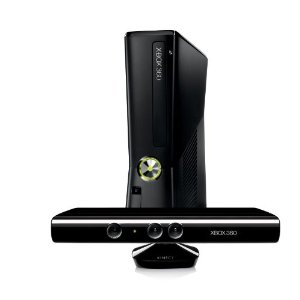 Now the Xbox Kinect is out, I’ll put my hands up and admit I’ve had an Xbox 360 for about four and a half years now. Although I owned the original Xbox, I was a Playstation geek back to the early days of the format. Waiting for the PS3 got boring though and as the delays grew and the price started looking more and more ridiculous, I jumped ship to Microsoft’s machine. Given that the alleged PS3 launch game, Gran Turismo 5, only made it out a couple of weeks ago and that multi format games are inevitably better on the Xbox, I don’t think I’ve missed out much. I still fire up my PS1 for a bit of retro gaming every now and then though.

In a cunning plan to get my wife into gaming gaming a couple of years back, we got a Wii and Wii Fit. It got a few outings but now mostly gets used for the BBC iPlayer and for our 3 year old to play Mario Kart on. It makes an excellent iPlayer machine, it’s a shame no one has ported XBMC to it really.

The Kinect is a motorised image sensor (read set of cameras) that track your movement and allow the Xbox to interpret them as in game actions. Kinect comes with a set of mini games on disc that give you an idea of what it can do. Setting up the Kinect was relatively easy- put the disc in and follow the on screen instructions. The Xbox needed to download some updates to the software on the disc and it required a couple of restarts- much like a Windows PC would! The Kinect sensor bar simply plugs into one of the Xbox’s USB ports and the sits either on top of your telly, or below it (height dependent). Ours had to sit below it since we happen to have a Wii sensor on the top.

Once it was all set up two things became apparent. Firstly, you need a fairly big room for it to work. We had to move our coffee table since the Xbox tells you to stand about 2 meters away from the sensor. Secondly, small children do not mix when trying to calibrate the thing. The Kinect is very good at tracking movement, so much so that you really need nobody else to be within an effective 4 square meter area when starting the thing up, other wise it gets horribly confused and your 3 year old is interpreted as your arm and will run amok.

Once it’s set up though, you begin to realise what the Wii’s been pretending to do well for the last umpteen years. Characters in the mini games provided scratch their heads when you do, wiggle their bottoms when you do, and although I’ve never successfully managed to get the Kinect to register a pelvic thrust, I’m sure it could. It really does work well, and what’s more amazing, when there are two of you with massively disparate heights, it can track the pair of you well. I’m 6 ft 4 and our three year old is just the right height to punch me in the groin yet the Kinect successfully tracked both of us at the same time. Fortunately I didn’t get punched in the groin on camera either.

Obviously the Kinect has it’s detractors. I’ve read that it plays poorly in bright sunlight and that the games, much like the majority of the output on the Wii, are gimmicky and not very deep. I can’t comment on the former because it’s December and the weather has been absolutely crud but in the case of the latter, I think the Kinect is there to complement the existing traditional controller and library of games for the Xbox, not to replace them entirely.

I note that EA Sports Active is out on the Kinect, this looks really interesting as I actually reviewed the Wii version a while back. Given that the Xbox Kinect version will actually track your motion rather than extrapolate it from movement of a controller strapped to your leg like the Wii does, it could be something a bit special.

The technology in the Kinect motion sensor is impressive and it is reflected in the price. A stand alone sensor with Kinect Adventures costs £129.99, which is pretty much the RRP of a Nintendo Wii. Bundled with an Xbox 360, you will pay up to £250 at the moment. Whether it is worth the initial investment depends very much on whether you think you will use it a lot. I know plenty of people (us included) who have Wii Fit boards gathering dust. Kinect is easier to use than a Wii Fit board though, and to my mind offers something sufficiently different to make it worth a pop.

This review is based on hardware provided to my wife along with a game by Ubisoft. This review is independent of any requirements placed on her by Ubisoft or their PR agency.

Bagged myself a few gaming bargains this Christmas

Where have all the racing games gone?
This entry was posted in Reviews. Bookmark the permalink.