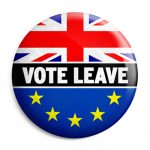 It happened quickly. Quicker than the most pessimistic had estimated. Polling had closed at 10pm on the 23rd June and the results were in by 7am the following morning. Of course early indications from the exit polls had already primed the financial markets and when they opened the pound lost two thirds of it’s value against the euro and over half it’s value against the dollar. Suddenly everything we didn’t grow, make or build ourselves became incredibly expensive.

Billions were wiped off company shares, immediately rendering the retirement hopes of a generation redundant. The repatriation of money overseas continued unabated for longer than many thought it would, causing the Bank of England to raise interest rates an unprecedented 6 times in the first month in an attempt to stimulate inward investment.

Almost overnight the only homes in the country that weren’t owned by the banks were owned by the elderly who had precipitated the disaster because they didn’t want some foreigner coming over from Europe. The government had to legislate a “right to remain” on repossessed houses to stop societal collapse. Shortly afterwards, the banks almost collapsed themselves due to liquidity issues, forcing the Bank of England to step in to provide huge amounts of quantitative easing that made the amounts made available during the recession look like small change.

Two leadership contests rocked the Conservative Party in the first three weeks. Dave was ousted in favour of Boris, who himself fell almost as rapidly as the pound. Paymaster General Hancock came to power as a compromise candidate who, although pro stay, was considered weak enough to not matter.

The next two years were tumultuous. Public sector spending was slashed by £40bn, as much as the austerity cuts to date had been, as the progress to towards the end game continued. Unemployment rose by three quarters of a million people as multi nationals moved their headquarters to the continent and local government, bereft of anything else to cut, made almost all their staff redundant. The numbers were added to by the hundreds of thousands of ex-pats forceably repatriated by Spain and France. The majority were retired, and had lost their homes for little or no compensation- the Spanish and French government had compulsorily purchased their homes using their existing stockpile of sterling currency, at a discounted rate. Their pensions were almost worthless thanks to the stock market crash and many turned fugitive rather than be removed by force. Deportation camps were set up along the French coast to house the transient Brits.

Scotland demanded a second independence referendum as almost 60% of Scots had voted to stay. Some darkly joked that London should declare itself a city state and remain in Europe. Some few even began investigating the possibility of making this happen. Scotland, besieged by Brits clamouring to move, closed it borders with England.

Tens of thousands of qualified professionals applied to work in Canada, America and Australia, and the exodus of skilled individuals began in earnest, draining even more money from the governments taxation income.

Foodbanks, overwhelmed by a continuous stream of people for dwindling supplies, were often the scenes of violence and occasionally riots. The Food Riots of 2019 lead to a state of emergency being declared. Supermarkets were allowed to employ armed guards after an increasingly violent number of robberies.

By 2020, the dead were routinely being collected by the army and incinerated without a funeral. Packs of dogs roamed the streets as many family pets were turned out. Electricity was only available two or three times a week and almost everyone had turned over their gardens to growing vegetables.

No change was in sight…

What do the changes in child benefit mean for you?
This entry was posted in Other. Bookmark the permalink.