There has been plenty written recently about how twitter is become a resource for journalists to source stories and find interviewees. Twitter itself has even launched a media guide for journalists.

The difficulty is sorting out the wheat from the chaff however. During the #ukriots, twitter was full of tweets about “happenings” but actually had more tweets asking people to not make things up. The few constabularies I follow also asked people to stop spreading rumours as it was counter productive.

So when I was checking twitter on Wednesday 10 August at about 7.30am and saw some rumours about Batchwood sports centre in St Albans burning down, I was initially dismissive, I checked Google, and specifically did a search for news stories using their side filters. nothing came up, and since their agreement with twitter for live twitter searches expired, nothing showed from twitter anyway. I also checked both our local newspapers websites- again nothing, although it was heartening to hear a cat lost for 3 years had finally returned home.

St Albans is an affluent commuter belt town and the sort of place unlikely to riot. I tweeted back to people saying I thought it was unlikely. However a few minutes later someone linked to a press release on the councils website which confirmed there had been a fire.

Although St Albans has a lot of people on twitter, there are obviously more people that aren’t. It seemed unlikely the sports centre fire would be given any coverage given the goings on in London, so I decided to write a blog post on the subject.

The blog post, which initially just detailed what had happened, linked to the councils press release and contained a link to our community radio station was really meant for people like me, who heard a rumour but couldn’t find anything on the internet.

I normally get 100 or so visits to this blog a day. By lunch time my stats looked like this: 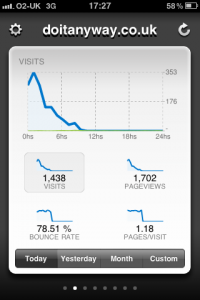 Even though by lunch time the local papers had updated their websites to cover the story (with little more than the press release and some quotes from councillors) my blog post still carried on to pick up visitors throughout the day, finishing with around 1,700 visits and just shy of 2,000 page views. The following day, I still had an excess of additional visitors, all due to the news story I effectively broke on the internet.

Even today (Friday 12 August), if I open an incognito window in my browser (this means any searches I do will not be biased towards me personally), and search for information about the fire, my post is still showing as second in google. Obviously it initially showed as first but I’ve been supplanted by one of the local newspapers now.

I think this does highlight in one small way what a lot of the social media evangelists have been saying, social media is a powerful tool for spreading news much faster than traditional media outlets. Even in non urgent areas like football gossip, I’m often seeing tweets linking players to clubs two or three days before it features in a newspaper or on mainstream websites like the BBC. If there were a better way of weeding the truths out from the untruths, I think the mainstream media would be in a lot more trouble than it currently is, and it’s currently in a lot of trouble anyway, as circulation declines and nobody has properly worked out how to monetise web content. 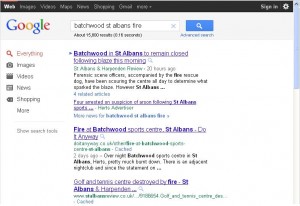 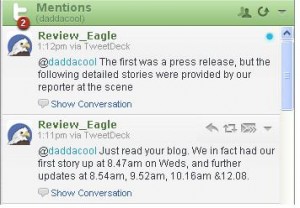 EDIT I’ve just been informed via twitter that the Review had it’s first story up at 8.47am. I’m informed it became the front page splash story after the police let their photographer on the scene, sometime after 11am.

You’ll never guess the answers to your top blogging and social media questions
This entry was posted in Technology. Bookmark the permalink.