There’s a slimmed down review of the Seagate Wireless Mobile Storage Portable Hard Drive 500GB on the parenting blog but for those of you that know your 5Ghz from your 2.4Ghz, I thought I’d go in to a little more detail. 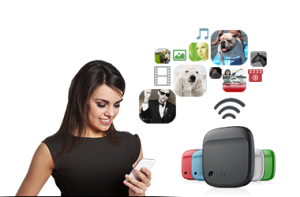 The Seagate Wireless mobile device is a 500GB 2.5 inch HDD that’s been stuffed into a caddy with a battery and a wifi card that retails for around £100. It’s available in a range of colours for some reason because viewing your stuff on the move is fun and colour probably denotes fun.

Colours aside, it works more or less as intended; as expected, the related apps on both IOS and Android leave a little to be desired- one didn’t seem to have the option to upgrade the firmware (Android) and the other, whilst looking a lot more polished, didn’t like playing the video I’d put on (because it wasn’t encoded in an Apple friendly format). This is sort of par for the course with bundled apps though and, certainly in the context of Android, doesn’t really affect the end user experience, other than making the initial set up a bit of a faff. I ended up manually updating the firmware by plugging the device into my PC- unintuitively, you have to make sure it’s switched off when you plug it in to a computer to get the PC to recognise it as a USB harddrive. Updating the firmware is simply a case of dragging and dropping a downloaded file to the drive and then unplugging it.

Actually putting data on the thing to start with is interesting though. Initially I tried to FTP files to the Seagate Wireless when it was plugged into my PC from my NAS box but the transfer rate was horrific- it had only progressed 9% on an 8GB file in about an hour- so I gave up on that idea, downloaded them locally to the PC and then from the PC to the Seagate Wireless. The Seagate Wireless only uses USB 2, so the data transfer rates aren’t quick by any stretch of the imagination. Further corners have been cut in the wireless stakes too- it only covers wireless G and only at 2.4Ghz at that. Not that you could find that out by looking at the manual or the data sheet (although the data sheet does tell you how many devices are packed on to a pallet, somewhat perplexingly).

Still, armed with Handbrake on the houses sole Mac, I ripped the two series of Scooby-Doo Mystery Incorporated from DVD into an IOS friendly format and transferred them over. You do need a separate driver (the Paragon driver off of Seagates website) to get your Mac to see the NTFS formatted drive but it’s easy to install and the manual tells you how. 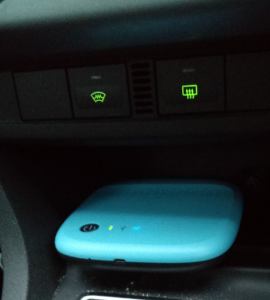 Two of the kids were able to stream Scooby Doo on to iPads when we were out and about in the car (an iPad 2 and an iPad Mini 2), without any issues. The battery life is given as up to 8 hours for a single device attached via WiFi, less with more (up to 3 in total) attached. We got somewhere between three and four hours of use from the Seagate Wireless with two iPads attached, and me dipping in to see what would happen if I tried to stream a 1080P .mkv to my Android phone at the same time.

In terms of Android, once you’ve set the device up via the app, you can simply browse to shares through a file explorer like ES File Explorer, and then play whatever you like with the media player of your choice. It works well, and I had no issues with playback.

Going back to the app, you can set WiFi pass-through- so the Seagate Wireless connects to an existing WiFi network, allowing devices connected to the Seagate Wireless to have internet access (something you obviously lose when you connect via WiFi to the Seagate Wireless). Although good in principle, and I have to say it did work, the practical use for this is a little limited as far as I can see. Out and about in the car, or in a holiday cottage with either poor reception or no broadband, it’s a bit pointless and if you’re at home, a NAS box does the same function anyway. Still, it’s nice to have.

So, some minor issues with the app and set up aside, it’s a thumbs up for the Seagate wireless from me. It’s compatible with plenty of stuff, including Chromecast, so at a stretch you can even take your Chromecast on holiday with you and watch your media library on holiday without having to resort to rummaging through the DVDs available wherever it is you’ve decided to stay. Like most media orientated devices, it works better with Android than the (more) closed garden of IOS.

The WiFi wont work on my Kindle
This entry was posted in Reviews. Bookmark the permalink.