Another tournament, another glut of criticism of refereeing. This time we’ve had another goal disallowed that clearly crossed the line. It shouldn’t have mattered of course because the Ukraine player was about a mile offside in the first place, not that any of the many many officials spotted it though.

Coupled with inconsistency, the has it/hasn’t it issue of whether a team has actually scored a perfectly good goal has now got Blatter back peddling and saying that (goal line) technology needs to be implemented. 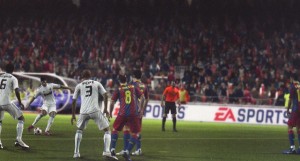 Too little, too late in my opinion. It’s time to hand over the ref’ing of our glorious game to Electronic Arts (EA). Their FIFA franchise is the best selling and best home football game and the technology should be employed to get offside/goal decisions right, and ensure consistency across the league and at tournaments.

How will it work? I hear you cry (I’ve chosen to ignore the cries of “you bloody fool”). Well it’s pretty simple really:

There are obviously a few technical hurdles to overcome- not least processing power, and the logicistics of integrating all the data together but I’m sure with a few million of the billions in TV revenue the Premier League has just been awarded, a workable system could be trialled by the end of the year.

Imagine, no iffy referee decisions, no diving for penalties, football played as it should be played. Of course, it wouldn’t be the same when half a dozen Man U players surround a PC cluster to complain about a decision but you can’t have everything.

No Fifa 11: or the way things have changed

Torres and Carroll deals benefit British economy
This entry was posted in Technology. Bookmark the permalink.