Can I use a Surface 3 on my lap with the type cover?

Microsoft is touting it’s new Surface 3 as an affordable laptop replacement. At £419 with 2GBs of RAM and 64GB of internal storage (£499 with 4GB and 128GB respectively), it’s reasonable affordable but really on’y comes into it’s own when you purchase the type cover for an additional £109 (look out for bundles though!). I’ve had my eye on one since they were announced- the Surface Pro 3 is a little too big and uses a CPU that’s a bit older and runs a little too hot for my liking. The thing that’s had me worried though is the question, “Can I use a Surface 3 on my lap with the type cover?”

Although the Surface 3 might only have an Atom processor in it, it’s the first device to have the brand spanking new Cherrytrail SOC on it. The detailed technical review over at Anandtech shows that Cherrytrail can keep up with the i3 in the Surface 3’s larger relative, the Surface 3 Pro, in a fair number of instances: 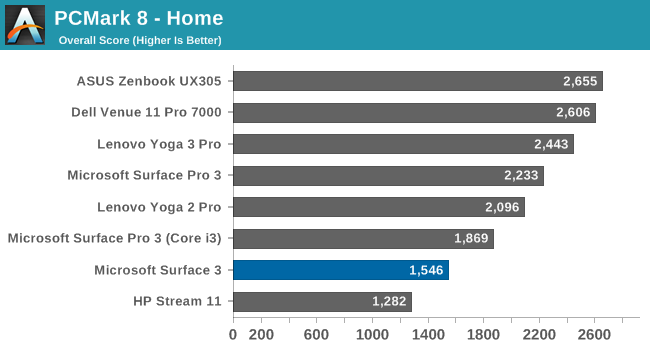 Obviously it’s not wicked fast; you need to spend at least half as much again on a UX305 to get a significant upgrade (or twice as much in the case of some of the other PCs in that list).

For me though, speed is only one of the factors I need in a laptop. The other is the ability to use it on my lap. My outgoing laptop was an ASUS S200E and I have to say I really got used to the touch screen, so that was a must for me. With an 11.6 inch screen, it was ideal for sitting on the sofa at home and working at, on the train, or even sitting on a chair (sometimes the floor) at a PR event and writing up the launch before I’d even left. It’s replacement needed to be as able in this usage scenario, otherwise I’d be stuffed.

At this point I have to say a big thank you to the MS Surface chap at John Lewis Welwyn Garden City who actually let me jump up and sit on the counter to try the Surface 3 on my lap (the security alarm cables just about stretched). This gave me a reasonable idea of whether the Surface 3 would be suitable for lap use. I found it

I’ve now owned a Surface 3 and a type cover for almost a week and I’m pleased to say it sits well on my lap. I find the middle of the three kick stand positions most suitable for a comfortable set up for typing and using the touch screen. The keyboard on the type cover is surprisingly good, there is plenty of travel on the keys, it’s backlit and has a pretty responsive touchpad. The touchpad does take a little getting used and at first I was right clicking more than I would have liked to by mistake but after a week of use, I’ve trained myself out of that habit.

The kickstand has 3 positions, and looks like this when on your lap: 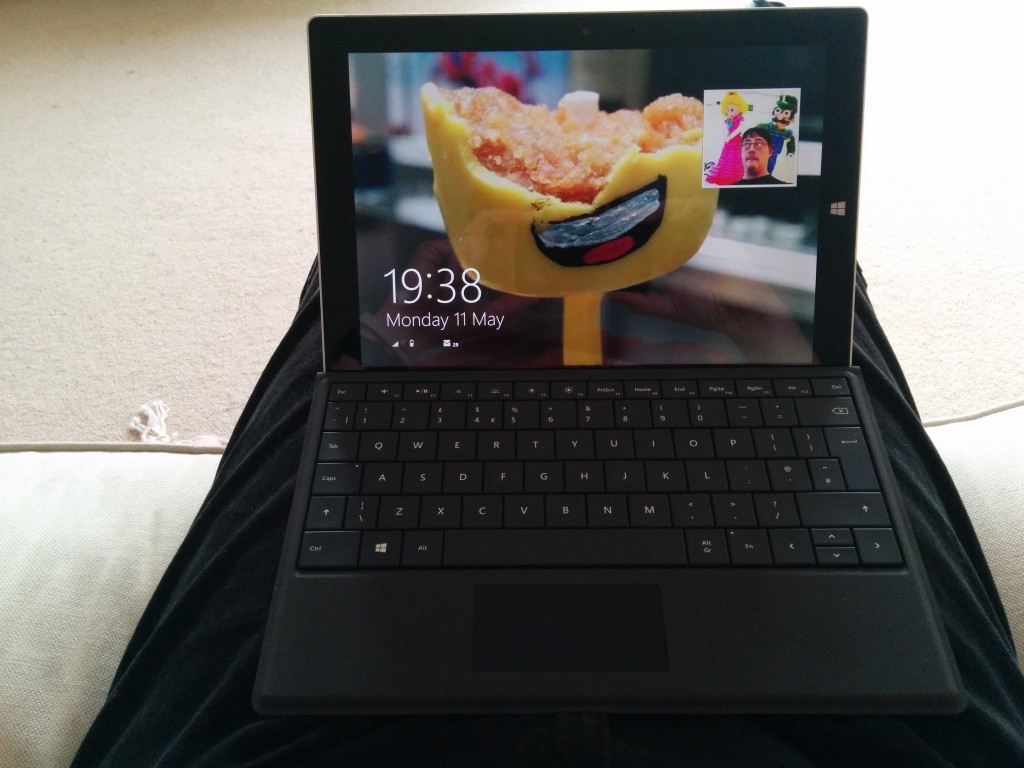 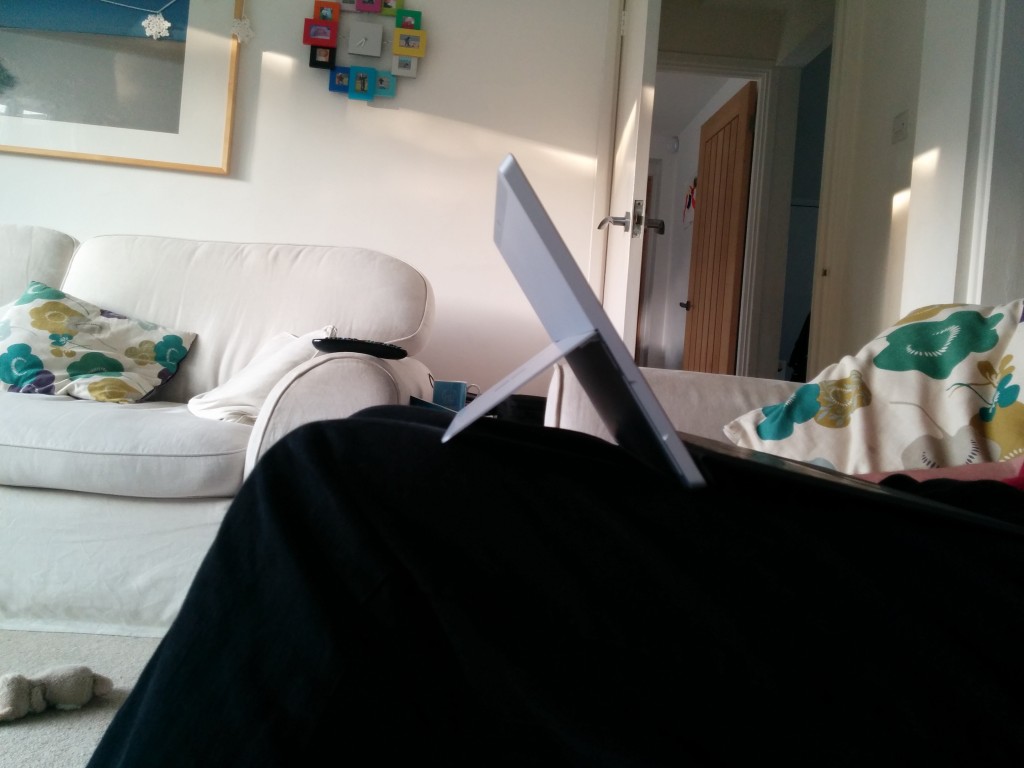 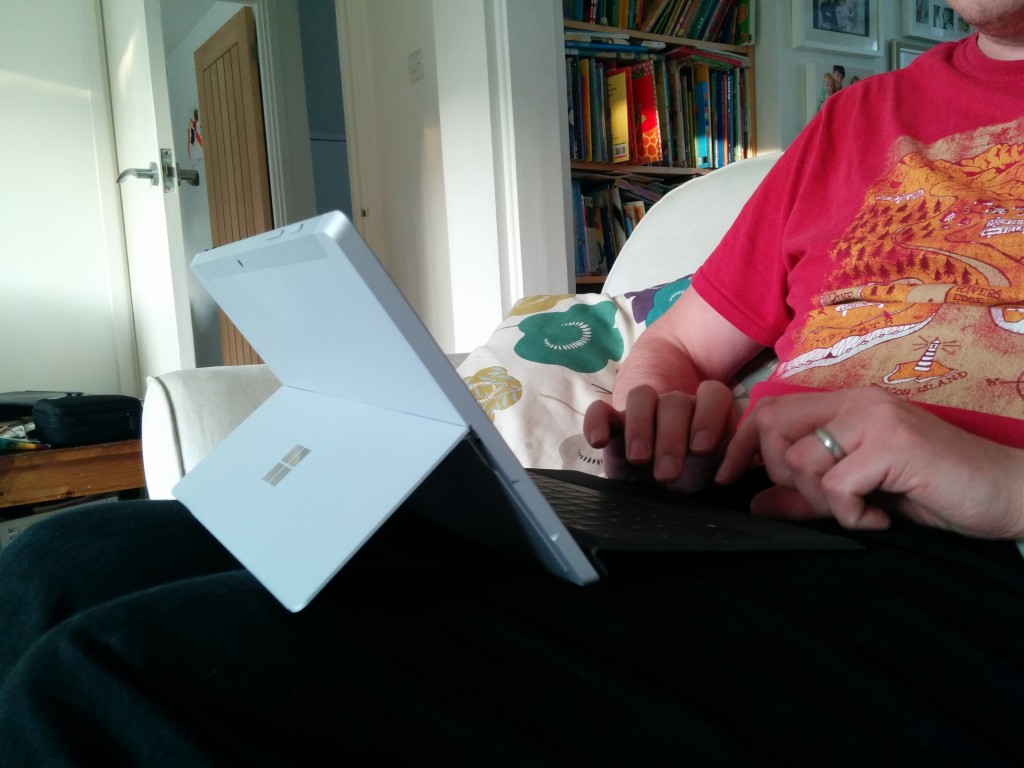