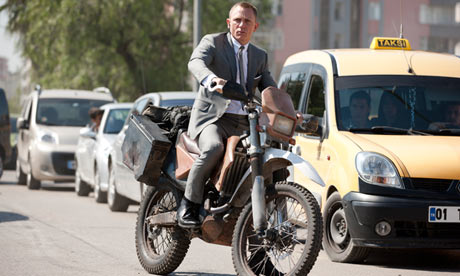 Skyfall isn’t a bad film. The plot isn’t as ridiculous as Quantum of Solace and in many ways an absence of the exaggerated sums up Sam Mendes’ take on Bond pretty well. But to me that’s what made Casino Royale brilliant; the more ludicrous elements were gone but it was still spectacular.

When you get to the end of Skyfall, you’re still waiting for that spectacular sequence that they’ve saved the budget for. But it doesn’t come, instead the credits roll and you’re left feeling a little bit underwhelmed.

I went with my father in law, a veteran of 40 odd years in the film industry, and he said it was pretty much due to Mendes. The direction is mediocre, whether due to budget constraints or whatever- there’s a tube crash sequence that resolutely refuses to put Bond in shot with the CGI whizzery- and at times it is difficult to feel the immediacy of the action.

The biggest flaw though is the standard Hollywood tropes dished out surrounding the main plot device. Yes, it’s hacking, so every single tired computer hacking cliché is dragged out and re-trodden. There are big, colourful screens of whizzy text scrolling at a ludicrous (and meaningless) speed, there’s comedy use of Youtube, islands stolen via hacking and worse. Bond does Mission Impossible? Something like that and it’s none the better for it.

I will tell you this, without giving anything away, one of these days I’m going to be shocked when I watch a film when the bad guy is caught because the good guys catch him and for no other reason.

Even ignoring the at times gaping logic holes in the film, it doesn’t outstay it’s welcome and it is nice to see Craig back as Bond after all the problems at MGM. The pacing is good, something which plagued Quantum of Solace, but Mendes is clearly not an action film, or more worryingly, a Bond film, director.

There are some nods to the Bond canon throughout and a sense of humour that hasn’t really been obvious in the franchise since Roger Moore was camping it up rears it’s head. Some of it works, some of it doesn’t.

Off to see it again next week, as we booked tickets before we knew we got into an advanced screening. Perhaps a second viewing will add something.

Nokia N8 review
This entry was posted in Reviews. Bookmark the permalink.